Celebration of the Building of Moycullen 50 Years Ago

“Celebration of the Building of Moycullen 50 Years Ago”

In 1953 I was a student at technical school Fr. Griffin Road Galway having completed my second year and received my group cert. Moycullen Church was under construction.

In spring of that year, two vacancies for apprentices to carpentry became available with the building firm Coogan & McNally; our teacher sent out Pat Keeler Tooreeney and myself for interview. We were both taken and were delighted to start work the following week.

By now the walls were built. There were four carpenters on site, I was told to attend to two of them and Pat the other two. I was not there for the knocking of the old church, the new one was extended, that means there are graves inside the church now. Mass was read in the national school, now known as Aras Uilinn. Our curate then was Fr. Higgins.

Other than the tradesmen all the labour was local – Mick (Larry) Conneely (Tullykyne), Hugh Molloy (Tullykyne), Bertie Laffy (Tullykyne), Tim McDonagh (Portarra), Paddy McDonagh (Church Road) who had a horse and cart and his brother Tommy (boy); Paddy emigrated so Tommy took over the man’s job. The biggest job he had was to fill and draw the barrels of water for the job. It was all hand mixed then. Then we had Willie (Larry) Walsh (Keogh), Reamy Conneely (Kylebroughlan), James (Sonny) Acton (Knockanranny), Joe Holland (Oldtown) all on shovels. Mick Conneely was the tea boy, he would gather up all the waste wood, make a fire, and boil the water in pots and kettles for lunch. Everybody would sit around with their bags for lunch, the stories were told, the yarns were spun so time flew. Sometimes a fellow would bring a pan of black pudding and sausages. Another would have raw eggs and suck them (no name mentioned).

The four carpenters were Bob Ford, Stephen Thornton, Michael Deely and Martin Kilgannon. Two of them stayed in John Lydon’s (blacksmith). I was sent up every morning for the bottles of tea for the 10 o’clock break for them (bottles in stockings to keep them warm). Martin Connolly from Galway (now a PD politician) was foreman.

I recently had a chat with a man from Galway and he told me it was his first job also. He worked as an architect and he was sent out to look after the church, his name Simon Kelly (well known now). He wondered if there was anybody who worked on the church still alive or around. I was quick to tell that Tommy McDonagh and myself are still on the living list in Moycullen.

When the roof was finished, Pat Keeler and myself were let go. So we had no other choice but to take other routes. Work was not available in 1953, I was not in Moycullen for the opening and the blessing of the church so here ends my experience and information of Moycullen 50 years ago. I may have left out some people who worked there before or after me but it is 50 years ago. 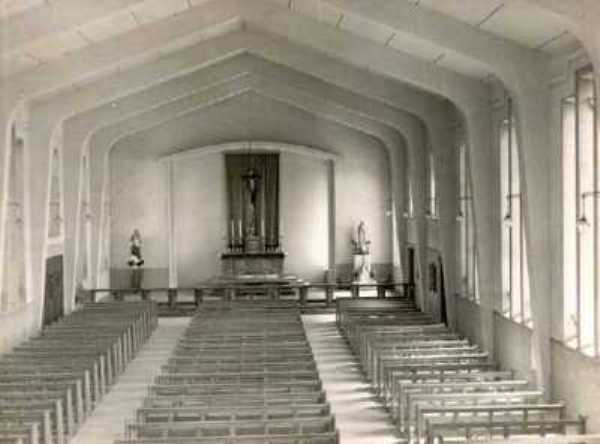